Many fires in Australia have caused harm and resulted in huge costs. There have be several major cases of fires causes sever damage and fatalities, including Ash Wednesday in 1980s in South Australia and Black Saturday in Victoria, 2009.

However there are several orchids that thrive following a summer fire.  These include the black fire orchid (Pyrorchis nigricans), the rabbit ears orchid (Leptoceras menziesii), and the leek orchid (Prasophyllum elatum).  Let me make it clear, they need a summer burn.  In Australia we have a fire season during summer, when no controlled burns are allowed.  Sadly this is when the orchids need the fire, so it is generally the accidental fires or arson which provide the right conditions.  During the autumn and winter months, controlled burns are conducted to prevent the bushland becoming a fire hazard in summer.  Yet these burns often occur just as the orchids are emerging, and can kill the plants.

The black fire orchid, Pyrorchis nigricans, as its name suggests, appears to benefit from a summer burn.  Its leaves are very common, and can grow up to a 5cm across (which is enormous for an Australian terrestrial orchid!).  They usually need fire to flower. 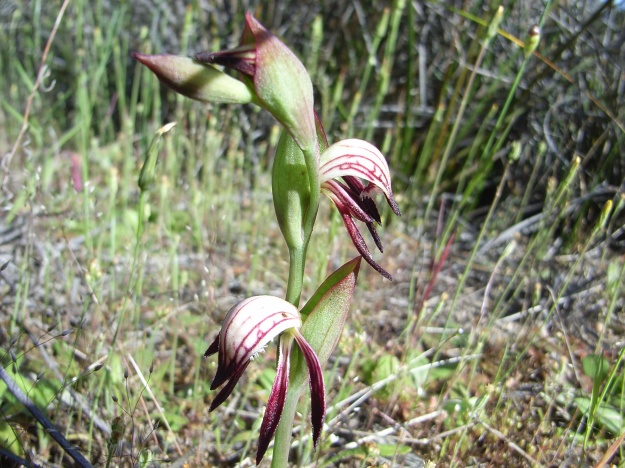 A typical flower after fire

After flowering, the whole plant turns black, hence its name, the black fire orchid.  This picture was taken in summer.

The Rabbit Ears Orchid, Leptoceras menziesii, seems to flower better after a fire.  Below is a lovely patch that my father found following an a fire.  Unfortunately I did not get to see the patch, and have only seen a couple of flowers at a time.

One of my favourite orchids after flower would have to be the leek orchid, Prasophyllum elatum.  For this genus, generally the flowers and stems are green, but after fire, the flowers and stems turn black.  They look like black twigs sticking up out of the ground, so blend in quite well with their surroundings.

A lovely tall specimen in a burnt area

… and Dad, thanks for the pictures! 😉