So it has now been four years since I have been observing this patch of helmet orchids (Corysanthes diemenica).  The first time I saw it in 2011 was probably the best year.  This year was not brilliant but it looked fairly good.  2013 was probably when I saw the least number of orchids flowering. 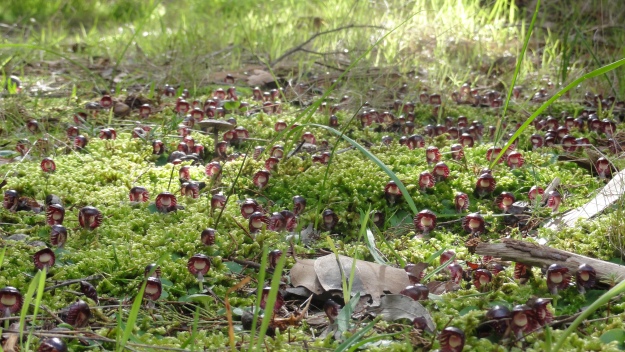 In 2012, there were not many flowers out and is probably the least number of flowers I’ve seen at this patch.

In 2013, there were not many flowers but a lot of leaves were up.

So 2014 put in a fairly decent display.  A lot of the plants that were up were flowering.

And here is a picture of the little helmet orchids (taken on my phone) when the sun decided to come out!

I haven’t written for a while due to a very busy schedule and unfortunately have not been able  to see many orchids.  It’s very nice to see that I’ve reached 400 followers – which is a lot of people – thank you!  Yesterday, if you were following me on Twitter (@OrchidNotes) it would have been pretty easy to see that I was out orchid hunting.  The major find was the Diplodium robustum. 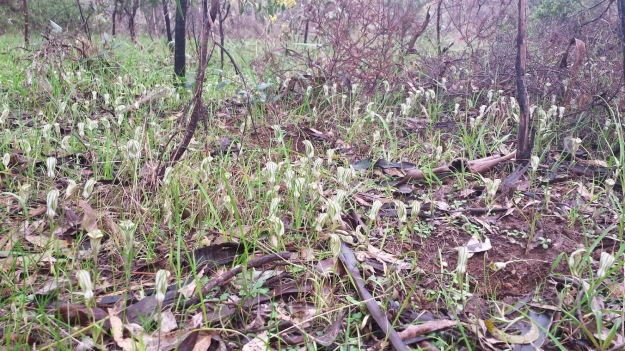 There was this lovely patch of orchids with over a couple hundre of orchids in flower and many more plants in leaf.  It was a very spectacular display. 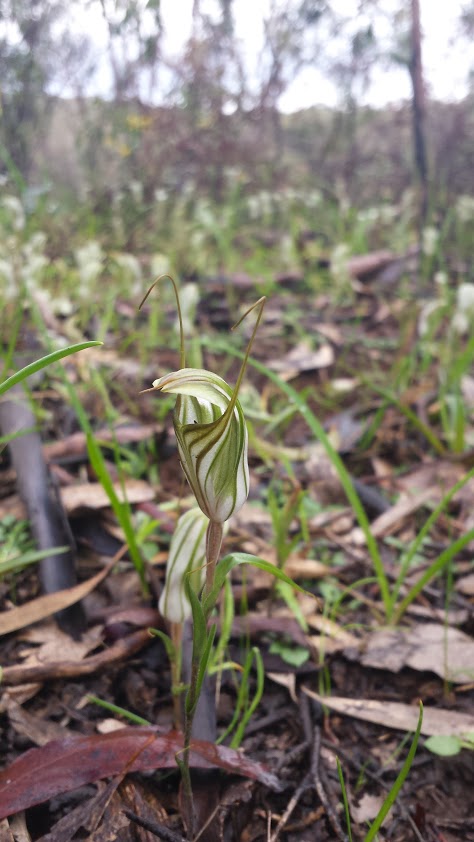 Two flowers with the rest in the background

A cluster of flowers

A bud on the left and a flower on the right

All these pictures were taken on my phone (Samsung Galaxy S4).  When I arrived home all the pictures I had taken are automatically uploaded to Google Images.  What was a surprise was that Google went through my pictures and picked the following as my best pictures from the day and then edited them for me!

It was fun to get out and see these wonderful orchids.  Have you been seeing any orchids recently?

In July 2011, I came across this amazing colony of Corysanthes dieminica (Helmet orchids.)  It was really exciting to find them, as I had not seen such a healthy colony before.  The picture below of the field of flowers is one of my favorite shots.

There were so many flowers.  It almost seemed that every plant that was up was flowering.  The total patch would be at least one metre wide, and nearly a metre and a half long.  It is sits between a path and a couple of Xanthorrhoea, under which there were a few flowers. 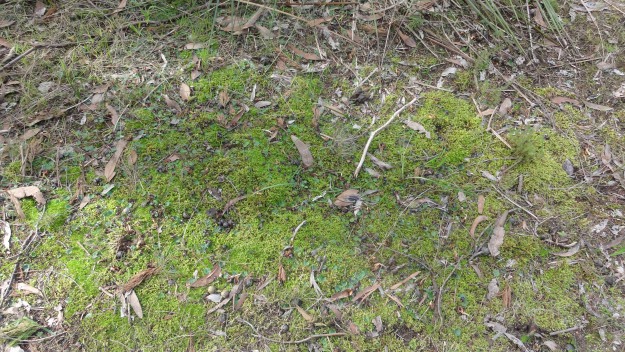 I find it interesting that all the flowers are facing one direction.  In this case it is towards the south.  Other smaller patches of Corysanthes diemenica have also faced mainly one direction, but not always to the south. 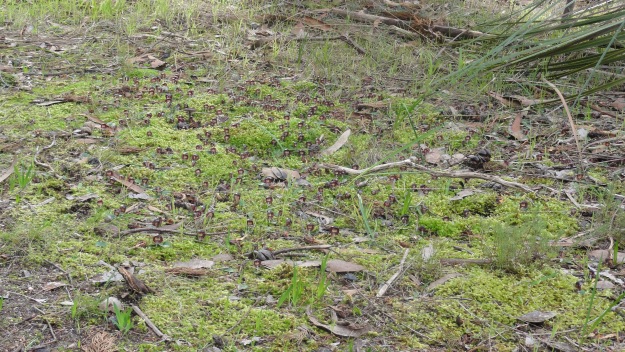 Another angle again in 2011

So after finding something as good as this, I had to come back the next year.  In 2012, there weren’t nearly as many flowers or leaves up.  The picture below shows the most dense section in 2012, which is nothing compared to 2011.

This year there weren’t many flowers either.  Looking across the different pictures, it looks like there are more leaves up this year, with a couple of flowers.  However, I did notice that there were more flowers under the Xanthorrhoea, than I could remember previously.  I wonder what will happen next year.

The colouring of the helmet orchids are so beautiful.  The flowers are also partially transparent, and this makes them stunning to look at when the sunlight comes through the flower! 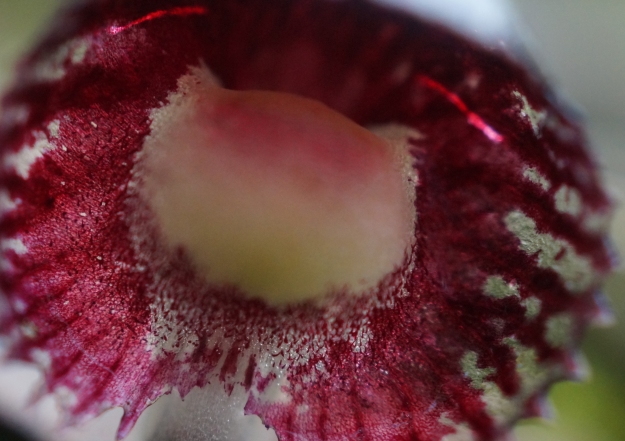 Click on any of the images to view them at a larger size.

Over the last week I have been frantically busy, and… well, wishing I had more time to go and hunt for some orchids.  So today’s post is going to be rather informal!  I do have some pictures to share with you, that were taken about this time of year, 15th May 2012.  They are of the Mosquito Orchid (Acianthus pusillus).  I have written about them before.

The flowers are very small, and the whole plant can stand up to 10 cm for a tall plant.  However, most seem to be closer to 6 or 7 cm high.  The following leaf shows the different growth stages.  If there has not been rain for some time, it generally stays the same size, but after a downpour, the leaf expands.

I thought the follow picture was quite cute.  It is so tiny, but as the buds open, it would probably become taller.

And here are some other, healthy specimens.

It is not uncommon, either to find fields of these orchids.

Enjoy your weekend, and hopefully I’ll see some orchids soon.

This is a very common donkey orchid, which is always a pleasure to find on a plesant spring day.

These orchids have very vivid colours making them easier to identify

It would have to be one of the most striking, , spring flowering orchids.  In a field of flowers they are quite spectacular, and will often be found with other spring flowering orchids including Diuris pardina (which it commonly hybridizes with), Glossodia major, and Thelymitra sp.  It flowers from September to November, and is found from Western Australia, right across the southern region of Australia to Victoria and Tasmania.

A healthy colony of plants

This orchid has been observed to grow in a variety of habitats and soil types.  It will regularly form colonies which can be very spectacular.

There is a yellow variety of this orchid.  In South Australia this variation is not particularly common.  Contrastingly in the eastern states, they mainly have the yellow variety and less of the colourful variety that we have here.  Personally I like the colourful one better.  There is reasonable variety between the flowers with some have a deep maroon to vivid purple  and sometimes white on the labellum.

There will be two free guided walks to see orchids at the Mount Lofty Botanic Gardens in Adelaide.  These walks are led by the Native Orchid Society of South Australia and are a chance for the public to see some common orchids and get to know some other orchid lovers.  The walks are on:

Walks start at 11am and are just over an hour in length and start at the Lower Carpark.  Please contact me if you are interested.

All pictures were taken at the Mount Lofty Botanic Gardens.

Each time I visit a site I find it offers something different.  There is a small site that I have visited twice now, and I posted some pictures of it here, on my first visit.  However, today I was there again, and the whole place yielded a totally different selection of orchids.  Last time I was there, it was June, and the middle of winter, but now some of the spring orchids were flowering. 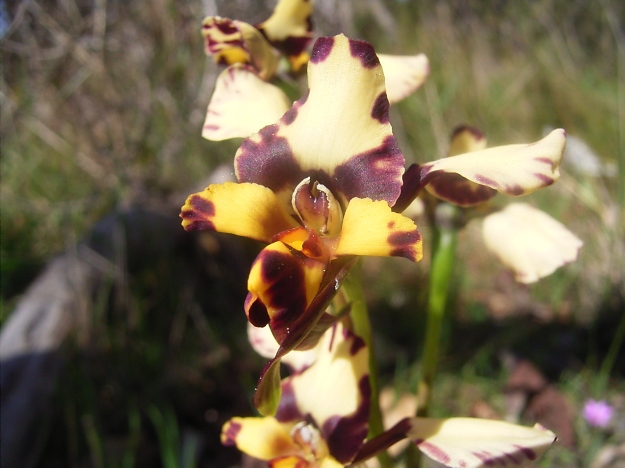 This is one of the first donkey orchids to open and it is reasonably common.  At the site, there were so many of these orchids, thriving and with four to five flowers open on a flower spike.  Also there were just masses of them, for a small roadside site.

I will be posting some more pictures from this site, as well as some videos.