To those who have visited the Mt Crawford area from Adelaide are usually left with an impression of an area that is noticeably colder and wetter.  I have had the pleasure of working in the area in the last couple of months and this impression has been reinforced, especially after getting drenched in heavy rain at my last visit.

I took a picture with my mobile telephone showing the mist around us as we worked.  We were above the cloud base on the edge of a sandstone ridge.  It is easy to keep warm climbing up and down a slope like this.  We were removing feral pines that originated from the adjacent commercial pine plantations and you may be able to see one lying on the left of this image.

On a sunnier day earlier in the month I found a pair of flowers of Diplodium robustum, the Large or Common Shell Orchid.  These were on the ridge next to the Heysen Trail.  These, I am told, are taller than usual for the species and resemble a form that occurs in areas of mallee.

From the back the flowers are strongly striped with green and white.  These flowers were facing south.  Elsewhere there was a colony of about 300 plants with over 30 in flower or bud; the majority of these faced up the slope.  This appears to be a strategy to make it more likely for the flowers to be visited by the insect pollinators.  The pollinators are small insects called fungus gnats, which look like small mosquitoes and don’t eat at all in their adult stage.  Only the males are pollinators and they need to be large enough to trigger the labellum inside the hood of the orchid.

At the base of the two flowers I found these little rosette.  This, surprisingly, is the same species.  This plant will not flower this year; it is preparing to flower in a future year.  There is a smaller flower in the lower left of this picture that I did not notice until I started writing this post.  It looks like a bud almost finished forming.

Orchids are not the only interesting flowers.  This is one of my favourite lilies – Wurmbea latifolia ssp. vanessae (Broad-leaf Nancy).  This is a female plant with the dark ovaries seen in the middle of the flower.  The flowers are white with rich, hot pink colours near the centre.  This was the first one I found on the 7th of June.  By the 20th they were easy to find.  I am told that the peak of flowering is mid-July and that earlier flowering this year is a result of climate change.

I am looking forward to visiting the area next weekend and taking more photographs, if the wintery weather lets us.

Because I was not busy this week, I was really looking forward to looking for orchids today.  It has been some time since I’ve been able to look for orchids, so it seemed a good opportunity.  However it has been raining, which is wonderful for all the plants and orchids, I just didn’t get to look for them this week.

In my recent post, Nice and Early, I showed a picture of an Eriochilus cucullatus with some pollen on it labellum.  It is not very often that pollen is found on flowers, so this was a slightly unusual shot from that perspective.  In this case, it appears that the pollen was transferred to this plant, but was not placed on the right spot for pollination.

Some of the self-pollinating sun orchids, such as the one below from the Thelymitra pauciflora complex, will have a fine white powder over the flower which is its pollen.

Here is a video showing how the pollen behaves when being transferred by a bee from plant to plant. 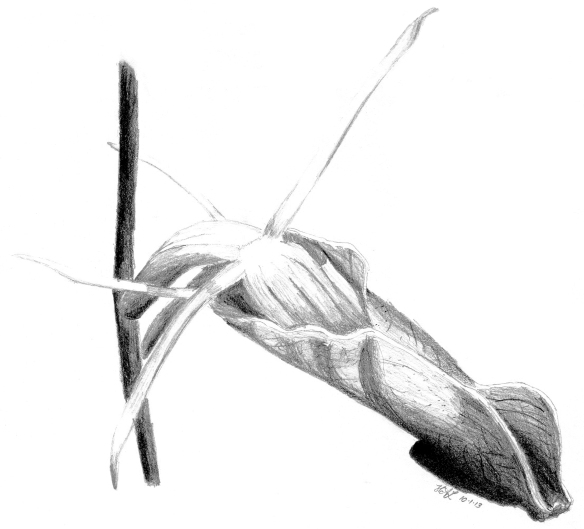